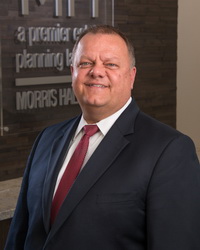 Partner, Attorney at Law
West Hunsaker was born in Melbourne, Florida and moved to Phoenix, Arizona during his teen years. West was blessed to be born into a good family who taught him the importance of protecting your loved ones and helping others. These teachings have influenced every aspect of his life and were a motivating factor for joining Morris Hall as an estate planning attorney.

Prior to joining Morris Hall, West worked for over 12 years as a Vice President for JPMorgan Chase & Company in New York City. During this time he managed an $8 billion portfolio and served as a representative on an industry-wide team focused on legislative issues affecting banking costumers.

In 2005, West joined Morris Hall with the desire to assist families and individuals to protect themselves and their loved ones. Since that time, he has helped Morris Hall grow throughout Arizona and into New Mexico while solidifying MH’s position as the premier estate planning law firm in the southwest.

West has worked with several charities during his professional career, such as United Way, Boy Scouts of America, KAET 8 (Public Broadcasting), Little League and Arizona Youth Sports. West also served in southern Utah, Colorado and eastern Nevada as part of a two year mission for his church.

West’s years of experience from the financial industry have driven him to focus his practice on estate planning, business planning, Estate Administration and Probate.  West truly believes that if you have a family, you have a reason.

West is the immediate past President of Carefree Kiwanis Club, co-chairman of Make-A-Wish Arizona Planned Giving Advisory Committees, Chairman of the Planned Giving Advisory Committee for Phoenix Children's Hospital and Chairman of the Phoenix Children's Hospital Ambassadors.  He is the recipient of the Practitioners with Heart award by Trusts and Estates Magazine.  West is also on the National Advisory Board for Make-A-Wish America and a member of the American Academy of Estate Planning Attorneys, American Bar Association, and the Maricopa Bar Association.

West and his wife Carolyn reside in Anthem, Arizona and have four children.  West is an avid sports fan and always finds time to watch college football, the NFL, Baseball, and Basketball.

Send a Message to West

Meet The Rest of Our Attorney Team