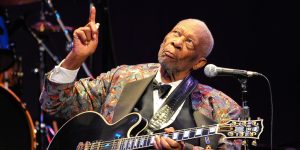 Even before blues legend B. B. King passed on May 15, 2015 at the age of 89, dark clouds hung over his estimated $10 million estate.
King is survived by eleven of his children, though King granted Power of Attorney to his longtime business manager, Laverne Toney.  About a month ago, one of King’s daughters, Patty King, filed elder abuse charges against Toney.   Ms. King alleged her father needed medical attention and pleaded with Toney to have her father taken to a hospital.  When Toney allegedly refused, police and paramedics were called to the scene..
Three of King’s children, Patty King, Karen Williams, and Rita Washington, had previously filed elder abuse and robbery charges against Toney back in November, claiming Toney had appropriated $20-30 million from their father, had been withholding his medication while on tour, and stolen several Rolex watches and other jewelry valued at $250,000; those charges were ultimately dismissed by the court.
Shirley King, another of King’s daughters, has taken to Facebook throughout this ordeal to publicly voice her outrage at Toney for his poor treatment of her father and allegedly keeping friends and family from seeing King in his final days.
Toney maintains that all of these claims against him are false, the desperate attempts of King’s children to dog-ear as much of their father’s money and future music royalties for themselves.
This is not the legacy that most of us hope to leave behind, and Mr. King’s Estate has not even been opened yet.
There is no amount of fame or money that can protect us from the issues that can arise around the settling an estate. Millions of dollars and good intentions cannot take the place of good, thorough estate planning.  Creating an estate plan can be an uncomfortable thought experiment that many avoid until it is too late.  Plus, once we begin creating an estate plan, many select their agents for Powers of Attorney or Executors based on our current predicaments – when we are able-bodied, in control of many of our affairs, and perhaps have not fully considered whether those we have selected will continue to honor our wishes and best interests when we are no longer there to watch over them.  The simple truth is that it can be hard for all of us to imagine the world without us in it.  Proper consideration and a thorough estate plan can help to minimize these sorts of ugly exchanges among your loved and trusted ones, if not prevent them altogether.
For once we pass, our plans are set in stone, and at that point, as the song goes, the thrill is gone.

Contributed by Morris Hall, PLLC, Heidi Harris.
About Morris Hall, PLLC:
At Morris Hall, PLLC we have focused our legal practice on estate planning for over 45 years.  Along with estate planning, our attorneys help clients and their families with matters of probate, trust administration, wills, power of attorneys, business planning, succession planning, legacy planning, charitable gifting and other important legal aspects.  We also have divisions in financial, real estate and accounting to help you incorporate all of your planning together, ensuring that everything works perfectly for your needs and situation. Our Arizona offices are located in Phoenix, Mesa, Scottsdale, Carefree, Tucson, Oro Valley, Prescott, Flagstaff and Arrowhead.    Contact us today at 888.222.1328 to schedule an appointment!
This blog should be used for informational purposes only.  It does not create an attorney-client relationship with any reader and should not be construed as legal advice.  If you need legal advice, please contact an attorney in your community who can assess the specifics of your situation.