Morris Hall, PLLC is leading the fight against Alzheimer's! Join our efforts by donating or registering to walk with us on November 5th! Learn more. 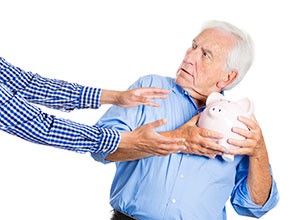 Legendary actor Mickey Rooney, born Joe Yule Jr. in 1920, recently testified about his horrific experiences as the victim of elder abuse. In March, at the age of 90, he bravely described for senators on the U.S. Senate Special Committee on Aging, the long-term emotional suffering and loss of personal control that followed his financial exploitation by family members.

According to ABC News, a Los Angeles Superior Court granted the actor’s request for restraining orders against stepson Chris Aber and his wife Christina Aber. Rooney feared retaliation against him, Rooney’s wife and another stepson, because Rooney charged the Abers with “verbal, emotional and financial abuse, and for denying [Rooney] such basic necessities as food and medicine.”

Rooney’s attorney, after reporting to the court that $400,000 has been found missing from Rooney’s bank accounts, has now been appointed conservator of Rooney’s estate. His case is continuing. However there are many lessons that we all can learn from this unfortunate situation.

According to the National Center on Elder Abuse website, elder abuse is a “knowing, intentional, or negligent act by a caregiver or any other person that causes harm or a serious risk of harm to a vulnerable adult.” It can include threats of or actual physical harm, emotional maltreatment, sexual contact without consent, financial exploitation, neglect or abandonment.

Elder abuse is largely under reported and exact numbers are not available. The abuse is often a secret tragedy; however government and private studies have attempted to understand the prevalence of elder abuse.

Protections need to be put into place for those approaching their golden years. An experienced estate planning attorney at Morris Hall can help clients set up legal protections to greatly lessen the likelihood of future exploitation as they age. The chance of incapacity in later years is real, and the law has developed certain planning tools to help seniors plan for that possibility.

While states’ legal terms and provisions may vary, all states have laws in place for these purposes. Some common examples include:

Long-term care insurance: Avoid potential problems with family caregivers by purchasing insurance to cover the cost of hiring in-home care or staying in a long-term care facility should you become unable to care for yourself.

Of course, if you or a loved one is the victim of physical, mental or financial elder abuse, alert law enforcement authorities for protection and contact Morris Hall to learn about potential legal remedies.

Talk to Morris Hall now before you are faced with potential incapacity or a weakened ability to protect yourself.