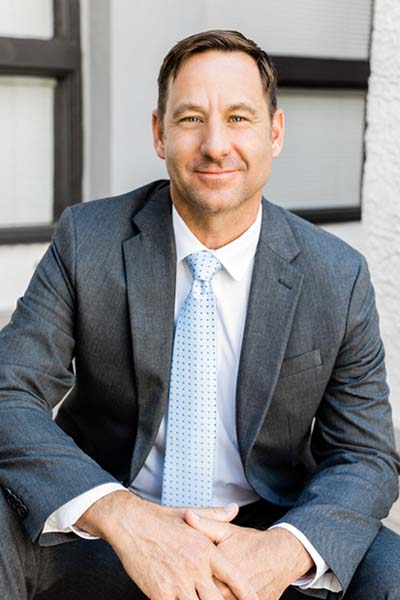 Kyle enjoys practicing estate planning law where he can learn each client’s unique story, establish an ongoing relationship and help them plan for their future. He also understands the special challenges of planning for a blended family as he was recently married and gained four bonus children, in addition to his four children.

A native of Phoenix, Kyle received his bachelor’s in philosophy from Arizona State University in 2003. He earned his law degree from California Western in San Diego in 2006. During law school, he interned for Judge Dennis Dairman at the Maricopa County Superior Court.

Kyle’s professional experience includes working for a Mesa law firm that represented homeowners’ associations, as a Deputy County attorney for Gila County, and as the Prosecutor for the Town of Payson. As the Prosecutor, he gained experience prosecuting criminals and conducting trials for crimes ranging from DUI to attempted murder.  For the last eight years Kyle worked for the US Border Patrol as a federal agent. He was a member of the Border Patrol’s tactical team known as BORTAC.

Kyle learned the value of hard work at an early age. As the oldest of four, he grew up raising and training horses and had many responsibilities involving their care. At nineteen, he served a two-year mission in Quito, Ecuador where he fully embraced how to love and care about other people. His appreciation for basic things like clean water, electricity and emergency services grew immensely.

Kyle and his wife have eight children ranging in age from 8 to 25 with one grandson, making Kyle a grandpa. Kyle enjoys working on old motorcycles and collecting old vinyl records. He is fluent in Spanish.